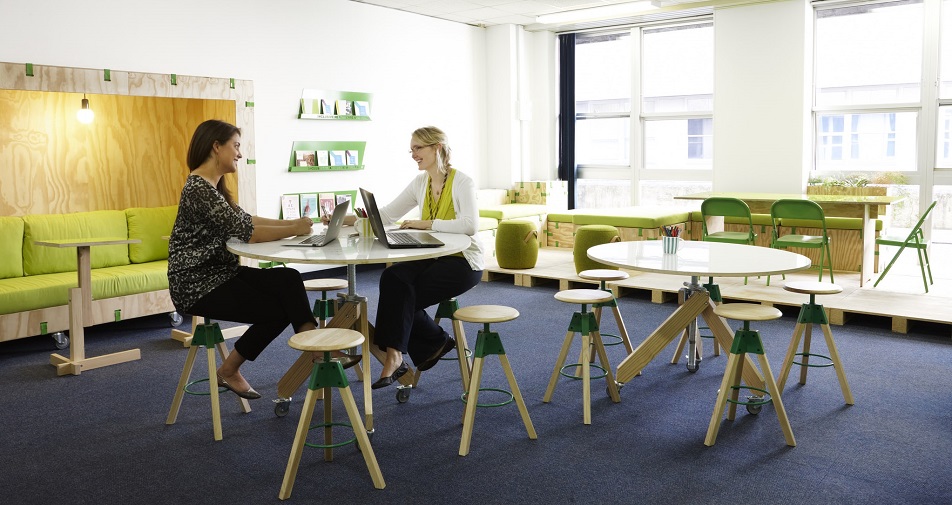 A discussion with an intrapreneur got the author to think about the pros and cons of embedding an innovation team in a tech hub or similar innovation district.

Article first written for the People + Strategy blog of HRPS (USA). Also appeared on the blog of the Strategic Capability Network (Canada).

Eric (not his real name) is an intrapreneur at a large Canadian company operating in the service sector. Innovation is high on the firm’s strategic agenda. Their innovation team is working from an innovation ecosystem in the Waterloo region, 80 kilometers from headquarters. In this vibrant community, they are surrounded by like-minded entrepreneurs, intrapreneurs and inventors. They are insulated from the aspects of the corporate culture that stifle innovation. Their physical environment has been designed to promote creativity. They are exposed to people with different backgrounds and knowledge.

In short, this tech community represents the perfect place to generate ideas! But it might create other problems down the road – when it is time for commercialization…

Similar communities exist here in Canada and elsewhere in the world. The technology ecosystem where Eric’s colleagues work is known as Silicon Valley of the North. OpenText and Blackberry were built there.

Innovation hubs used to be located predominantly in suburban areas (following Silicon Valley’s campus-model). But nowadays we have more compact innovation districts right in the core of our cities. Some of the “Silicon-babies” listed above are urban hubs. Here in downtown Toronto, the MaRS Innovation District was launched in 2000; an innovation community is emerging in the South Core; and construction of a new Waterfront Innovation Centre is scheduled to start later this year.

Of course, Eric’s company is not alone. It has become quite common for large, established businesses to embed their creative teams in innovation hubs. As MaRS website elegantly says, it is a great way to “boost creativity, scout talent and rekindle the entrepreneurial flame.”

Commercialization hand-off is a challenge

Eric and I had a chat recently about the change management aspects of innovation. From his perspective as an intrapreneur, he sees commercialization hand-off as a major challenge. As he explained: “The innovation team develops a new product or process in their little room; it becomes their baby. But when it is time to bring the idea to market, the rest of the organization is not ready. There is no buy-in.”

The fact that Eric’s team works in Waterloo, away from the rest of the organization, might be part of the problem. Eric, who is based at head office and goes back-and-forth between the two locations, is working on bridging the two worlds. But is it enough? By locating innovation teams in start-up communities, are companies making it harder to move from idea to commercialization? What could be a better model?

The story of consumer electronic Belkin, as told by INSEAD professor Manuel Sosa in his article “An Innovation Reinvention for Incumbents”, illustrates a phased approach.

In the fall of 2000, the company hired designer Enersto Quinteros with the mandate to build an in-house design team. As Sosa explains, “Quinteros accepted the job, but demanded a separate facility for his design team, apart from Belkin’s headquarters”. They settled on an old Hollywood building one hour-drive from head office. The idea was to insulate the team from “Belkin’s corporate culture [which] at that time was so far from where it needed to be.”

After a series of initial successes, both the mandate and size of Quinteros’ department increased. They were now the team in charge of creating innovative products for Belkin. Their colleagues at headquarters became increasingly curious about the group, visiting the Hollywood shop to see how they worked differently.

Sosa points out that “Crucially, Belkin’s CEO at that time, Mark Reynoso, cultivated that difference rather than trying to squelch it.”

It took a while, but Belkin’s corporate culture evolved. In 2010, they were ready to end the physical separation between the innovation team and the rest of the firm. “When Belkin relocated to Playa Vista (California), the designers not only came along but Quinteros also led the design of the new workspace.”

Sosa concludes the Belkin story as follows: “Quinteros departed to become Chief Design Officer for Johnson & Johnson in 2014, but the innovation culture he helped to inaugurate at Belkin lives on. Belkin continues to be at the vanguard of the Internet of Things with its expanding range of WeMo smart devices for the home, its acquisition of Linksys and a wide range of other products.”

The Belkin story reminded me of my own experience from the same period, i.e. the early 2000s. Back then I was the Corporate Development executive at Sage, a technology consulting firm. The business had been acquired by an international group of advertising and marketing agencies (this was when media agencies started to become digital). Part of my mandate was innovation: launch new services and transform the way the business operated.

We were headquartered in Toronto (Canada), where the business had been started. The bulk of our business was Canadian but we had entered the US market successfully with a small team located in New York City.

The CEO and I agreed that the smaller, nimbler US operations represented the perfect “live lab” for our experimentation. A good sales man, he convinced me to add the general management of our US operations to my responsibilities. I moved to the Big Apple, took over the US business and started experimenting.

In essence, the leadership team in Manhattan was our innovation team. In order to lower our fixed costs, we moved from our corporate-looking building mid-town to a funky location near Greenwich Village: one of the ad agencies owned by our parent company had extra space available. Their offices were like nothing we had seen before: creative types zooming along on foot-operated scooters; that sort of things.

It was both refreshing and inspiring. We must have felt no different than Eric’s colleagues in their tech hub in Waterloo. We were ready to innovate!

During the two years it took to transform the business, the NYC office worked in constant collaboration with headquarters in Toronto. We had people go back and forth between the two cities to collaborate on different aspects of our experimentation. We leveraged the passions, ideas and efforts of both groups.

Of course, I worked with the CEO – and also our President, who was running our Canadian business from headquarters – to protect the innovative spirit of the US team (policy exemptions; budget flexibility; etc.). But we also made sure that the new approaches or services devised in the US – i.e. the “baby” of the US team – was also the “baby” of their colleagues in Toronto. From the very early stages we worked hard at generating buy-in from both sides.

That is one of the reasons I kept an office in Toronto, from where I usually worked on Mondays or Fridays. It gave me an opportunity to engage regularly with the folks in Canada and monitor their feelings and true levels of commitment. I could more easily see how to strengthen the partnership between our Canadian and US teams. I also spent a lot of time coaching and guiding leaders on both sides as we were going through change.

When the US team was ready to bring an idea to market, their Canadian colleagues were equally eager to see the outcome. If things were not going exactly as expected, they were quick to provide support and learn from the experience. Conversely, if the experimentation was successful, they were ready, willing and able to adopt the new approach in Canada – with market adjustments if necessary.

I have no fundamental problem with the practice of embedding innovation teams in tech hubs or innovation districts. After all, I used a similar approach myself at Sage. It is a great way to boost creativity while shielding the team from the risk-avoidance, control-oriented traits found in most corporate cultures.

However, it is critical to: 1) start working early on preparing the stage for the eventual commercialization of ideas; and 2) make the corporate culture more innovative.

The integrated approach we used at Sage is a good way to manage the dynamics during the initial period. Once the corporate culture has become innovative enough, it is time to bring everyone together again as Belkin did.